Beginning during Prohibition, 80 Saint Marks Place was a vital destination for performers of all kinds. Jazz greats such as Thelonious Monk, Harry “Sweets” Edison, John Coltrane and Frank Sinatra performed here before Theatre 80 was established in the former nightclub. The tradition of excellence continues at Theatre 80 where the careers of many famous performers were launched. Some of the famous names are Gary Burghoff, Bob Balaban and even one of our ushers, Billy Crystal. During the 1970s and 80s as a film revival house, people were able to see vintage films on a movie theatre screen in an audience setting in Theatre 80. It was also visited by a host of great names in theater, many of whom left their names, foot and hand prints in the cement of our sidewalk. A partial list includes Gloria Swanson, Joan Crawford, Myrna Loy, Ruby Keeler, Joan Blondell, Kitty Carlisle, Allan Jones, Winnie Shaw and Fifi D’Orsay. Recently, Joan Rivers added her name to the list of luminaries enshrined here. 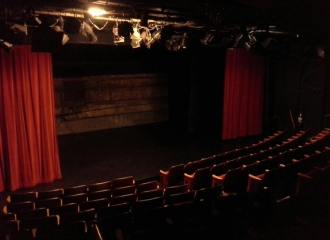 END_OF_DOCUMENT_TOKEN_TO_BE_REPLACED

Scheib’s Place, the Speakeasy at 80 Saint Marks Place was where the New York City Council drank during Prohibition. Today one can find evidence of every aspect of the defense and camouflage of the hidden bar from the iron fittings that held steel plates over the windows to the bomb triggers in the basement –…

END_OF_DOCUMENT_TOKEN_TO_BE_REPLACED

One thought on “About”